EVENT POSTPONED (date TBA). Hold on to your tickets! They will be valid for the new date once announced.

Music artists are one of the most enduring storytellers. Legendary folk pop artists and Judy Collins & Arlo Guthrie have been weaving golden stories for over fifty years now, and their catalogue is a stunning music tapestry. Hear and experience their timeless classics once again at the Tanglewood Music Center on Sunday 21st June 2020. This is music truly worth celebrating. Be part of this momentous musical event. Book your tickets now! 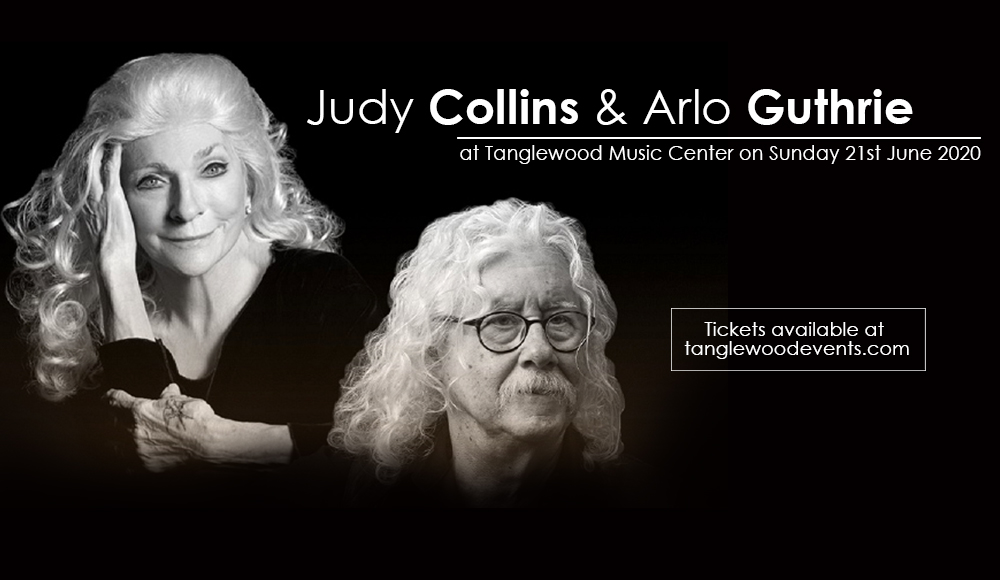 Folk pop music legends Judy Collins & Arlo Guthrie are both returning to the live concert stage for an evening of timeless folk songs that told enduring stories that inspired many generations. Collins and Guthrie are now lauded as the pillars of folk-pop music, with careers spanning over fifty years.

Judy Collins has an eclectic catalogue of recordings which has include folk music, show tunes, pop music, rock and roll and standards. She is known for her sublime vocals, her vulnerable yet bold songwriting, that earned her the moniker “wild angel of pop,” as coined by the New York Times critic Stephen Holden. Collins released her debut album "A Maid of Constant Sorrow" in 1967, but it was the lead single from the album "Wildflowers", "Both Sides, Now" — written by Joni Mitchell — that gave Collins international prominence. The single not only was a top 10 Billboard chart-topping Pop single, but it also gave Collins her first Grammy Award for Best Folk Performance. The pinnacle of her recording success came in 1975 as she recorded Stephen Sondheim's "Send in the Clowns" from her best-selling 1975 album "Judith". The single hit the charts twice. It first charted on the Billboard Pop Singles chart in 1975 and then again in 1977, spending a whopping 27 non-consecutive weeks on the chart. Once again, the hit single produced yet another Grammy Award nomination for Colling in the Best Pop Vocal Performance, Female category, as well as a Grammy Award win for Sondheim for Song of the Year.

Around that same era, Arlo Guthrie, son of western folk singer – songwriter, Woody Guthrie, followed in his father's footsteps as he began singing songs of protest against social injustice, and storytelling while performing. Guthrie's debut piece, "Alice's Restaurant Massacree", a satirical talking blues song about 18 minutes in length that has since become a Thanksgiving anthem.

This will go down the books as one of music's finest moments. With just a few easy clicks, you'll soon be part of it. Click that 'buy tickets' link now!