Apollo's Fire present Virtuoso Bach and Vivaldi at Tanglewood Music Center on Friday, July 16th 2021. Apollo’s Fire and conductor Jeannette Sorrell set sparks flying with Bach’s fiery Concerto for Two Violins and the beloved Concerto for Violin and Oboe, as well as Vivaldi’s dramatic Concerto for Four Violins, or his Double Violin Concerto in A minor, and the “Gardellino” Flute Concerto or the wild Concerto for Two Cellos in G Minor. 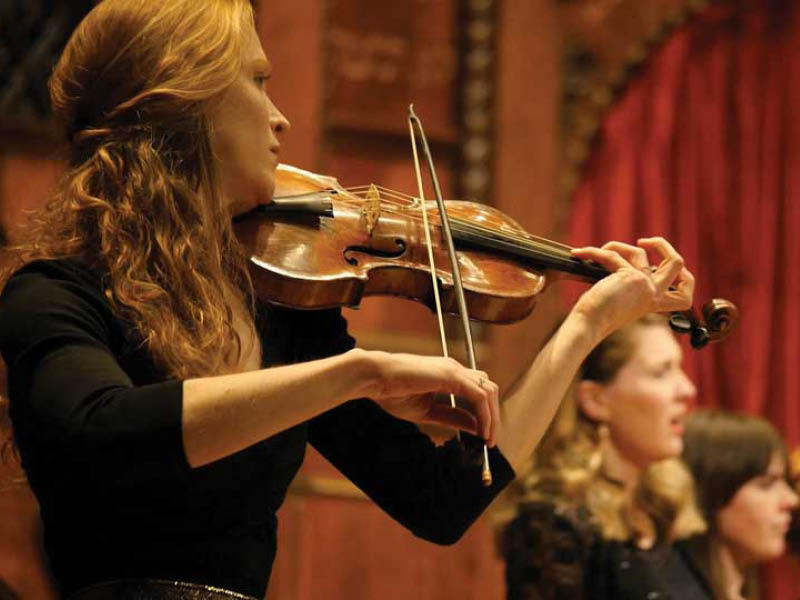 Jeannette Sorrell is recognized internationally as a leading creative voice among early-music conductors. She has been credited by the U.K.'s BBC Music Magazine for forging "a vibrant, life-affirming approach to the re-making of early music… a seductive vision of musical authenticity." Sorrell was one of the youngest students ever accepted to the prestigious conducting courses of the Aspen and the Tanglewood music festivals. She studied conducting under Robert Spano, Roger Norrington and Leonard Bernstein, and harpsichord with Gustav Leonhardt in Amsterdam. She won both First Prize and the Audience Choice Award in the 1991 Spivey International Harpsichord Competition, competing against over 70 harpsichordists from Europe, Israel, the U.S., and the Soviet Union.

Named for the classical god of music and the sun, Apollo's Fire was founded in 1992 by the award- winning young harpsichordist and conductor Jeannette Sorrell. Sorrell envisioned an ensemble dedicated to the baroque ideal that music should evoke the various Affects or passions in the listeners. Apollo's Fire is a collection of creative artists who share Sorrell's passion for drama and rhetoric. Apollo's Fire enjoys sold-out performances at its subscription series, which has drawn national attention for creative programming. Apollo's Fire has released 22 commercial CDs, seven of the ensemble's CD releases have become best-sellers on the classical Billboard chart: the Monteverdi Vespers, Bach's Brandenburg Concertos & Harpsichord Concertos, a disc of Handel arias with soprano Amanda Forsythe titled, The Power of Love, and Jeannette Sorrell's four crossover programs – Come to the River – An Early American Gathering, Sacrum Mysterium- A Celtic Christmas Vespers, Sugarloaf Mountain – An Appalachian Gathering, and Sephardic Journey – Wanderings of the Spanish Jews.